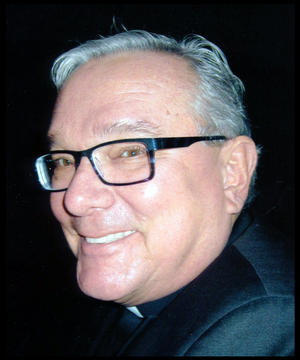 His work here on earth is complete and he has answered the final call. Reverend Barrett Scheske passed away on Friday, July 24, 2020, in Medicine Hat, Alberta, at the age of 71 years after a brief battle with cancer. He leaves to cherish his memory his wife, Mary Jane; sons, Myles Scheske, Benjamin Scheske, Joshua Scheske (Alyssa Lentz) and Kevin Harrison (Alanna); his grandchildren, Parker Harrison and Ainsley Harrison and his sister, Kimberly Scheske. Barrett also leaves behind aunts, cousins, sisters-in-law, brother-in-law, colleagues, friends and parishioners from near and far who will miss his presence in their lives. He was predeceased by his wife, Marilyn Scheske on July 14, 1994. Barrett Bradford Frederick Scheske was born in Eriksdale, MB on September 28th, 1948, to Rudy and Agnes Scheske. He received his early education in Manitoba, later graduating from high school in Swift Current, SK. He attended Dana College in Blair, Nebraska, completing his Bachelor of Science degree, majoring in Theatre and Communication. He immersed himself in the freedom and fun of college life to its fullest measure, much to the chagrin of his parents. With those wonderful four years behind him, he entered the Lutheran Theological Seminary in Saskatoon, SK and settled down to the task of earning his Master of Divinity degree with the ultimate goal of performing the work God had intended for him. He was ordained on June 6th, 1976 in Winnipeg, MB and began a lifelong vocation as pastor, preacher, counsellor, teacher and friend to many. During this time he was privileged to serve several congregations that included Lemberg, SK, Edmonton, Claresholm, Medicine Hat, Bow Island, Foremost and Hilda. One of the greatest gifts Barrett possessed was his ability to fit in to any church setting, ranging from the smallest rural churches to large city churches to the Inner City Ministry in Edmonton. He made each parish his home and developed life-long connections with many parishioners. Barrett first attempted to retire in 2006, trying his hand and his gift of the gab as a car salesman. He returned to the ministry in 2008, finally recognizing that it wasn’t that easy to leave his true calling behind. He served various congregations until failing health in the summer of 2019. Barrett loved his children without reservation through both the good times and the tough times. His grandchildren knew him as Papa Bear and he enjoyed watching them grow into the loving and sensitive young people they are today. He loved cars, but never thought twice about trading one in on a whim and coming home with a new one, a bigger one, or a faster one. He had a wonderful, rich voice and he used it to its full advantage, whether that be through preaching, singing, telling stories or giving directions. Barrett loved that he was called to be a “shepherd” and he followed that path with enthusiasm and integrity throughout his 43 years of ministry. He touched many lives over the years and he will be missed by those who knew and loved him. Due to COVID 19 restrictions, the Funeral Service will be by invitation. The private Funeral Service will be held at Cook Southland Funeral Chapel, 901 - 13 Street S.W., Medicine Hat on Friday, July 31, 2020 at 11:00 a.m. with Pastor Jim Bredeson and Pastor Brad Everett co-officiating. A private interment will take place in Claresholm, AB at a later date. In recognition of the loving and professional care Barrett has received, family wish to extend their heartfelt appreciation to Dr. Jeraj, Homecare, Palliative Care and the staff at St. Joseph’s Home Carmel Hospice. Flowers are gratefully declined. Memorial donations may be made to the charity of one’s choice or to Victory Lutheran Church Perpetual Remembrance Fund, 2793 Southview Drive SE, Medicine Hat, Alberta,T1B 2H1.

Condolence messages are sent through an approval queue prior to publication. Once approved, your name and condolence message are viewable by the public. Your email address will remain private, and is for notification purposes only. Please refer to our Privacy Policy for more details.