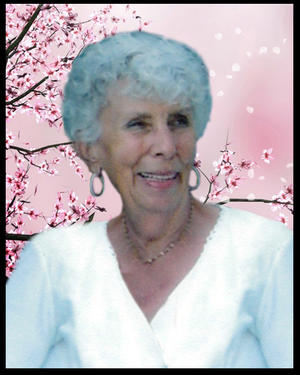 Noreen Baker, beloved wife of the late Fred Baker, passed away peacefully while surrounded by her family at the Haven Care Centre in Medicine Hat on Monday, July 1, 2019, at the age of 90 years. Left to cherish her memory are her children, Jim (Dorothy) Baker, Linda (Randy) Lehr, Tom (Darlene) Baker and daughter-in-law, Andrea Baker; grandchildren, Julie (Derek) Burns (Emily and Troy); Angela (Tyler) Grafftas (Noelle, Nathan, Riley and Tracy); Mona Baker and Owen Baker; Scott (Mandy) Lehr (Meranda, Niklas and Markus); Craig (Nicole) Lehr (Cash and Maddison); Rochelle (Tommy) Dickie (Jaxon, Justin and Jared) and Shelley (Ross) Weimer (Heidi); sister, Toni Frieburg (Jim Luco) as well as numerous nieces and nephews. Noreen was predeceased by her husband, Fred; parents, Joe and Clara Hurst; son, Rick Baker as well as her sister, Audrey Anderson. Noreen was raised on the family farm in the Piapot area. While there she fell in love and married Fred. His work took them on the road with a seismic truck and trailer. Having four children in their travels. They eventually settled in Calgary for school. Later they moved to Medicine Hat and from there to a farm on highway #3. Noreen loved it there! Always baking for family and friends... the coffee was always hot. So Fred could retire, Noreen went to college renewing her secretarial schooling from years before and then took a job at a trailer sales. Her greatest love was her grand and great-grandchildren as they brought such joy to her. Noreen moved to South Country and then to Haven Care Centre where she became very close to the nurses. They were like family to her and they treated her like family. Noreen always put family first and she will be forever missed. A private time of remembrance will be held.

Condolence messages are sent through an approval queue prior to publication. Once approved, your name and condolence message are viewable by the public. Your email address will remain private, and is for notification purposes only. Please refer to our Privacy Policy for more details.